The 25-year-old has put pen-to-paper on a three-and-a-half year deal through to the summer of 2024, with the option of a further year. 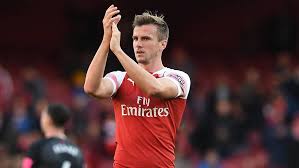 The 25-year-old has put pen-to-paper on a three-and-a-half year deal through to the summer of 2024, with the option of a further year.

The former Bolton defender reportedly came close to leaving the club on loan over the summer but has established himself in the Gunners first team under Mikel Arteta this season.

“Since I started as manager, I have been hugely impressed with Rob’s contribution to the club and the dressing room, on and off the pitch. The quality of his work every day on the training pitches is excellent, and he is translating this into consistently high performances in matches," said Arsenal boss Arteta.

"We all know Rob’s quality, which he has shown in his displays during the intense moments of those two FA Cup final victories. We are all very happy that Rob has signed a new contract, he is very popular with all the players and staff, and we’re looking forward to watching him continue to grow with us in the coming years.”

Technical director Edu added: “We are very happy to have signed Rob on a new contract extension. He is 25 years old, so is still coming into the peak of his career, and we are delighted that he’ll be with us during these important years.

"Rob has shown great quality and maturity on and off the pitch in recent months and is developing well. We are looking forward to Rob continuing his progression in the years to come.”

Aguero Still In Quarantine For Brighton Clash, But Ederson and Torres Return For...

Robert Lewandowski Penalty Proved To Be Enough As Bayern...

Atletico Go Seven Points Clear At The Top Of La Liga With...