Youth wings of the opposition party, National Democratic Congress, NDC, is set to hit the streets today, Tuesday, July 6, 2021, in a demonstration dubbed ‘A March for Justice’. 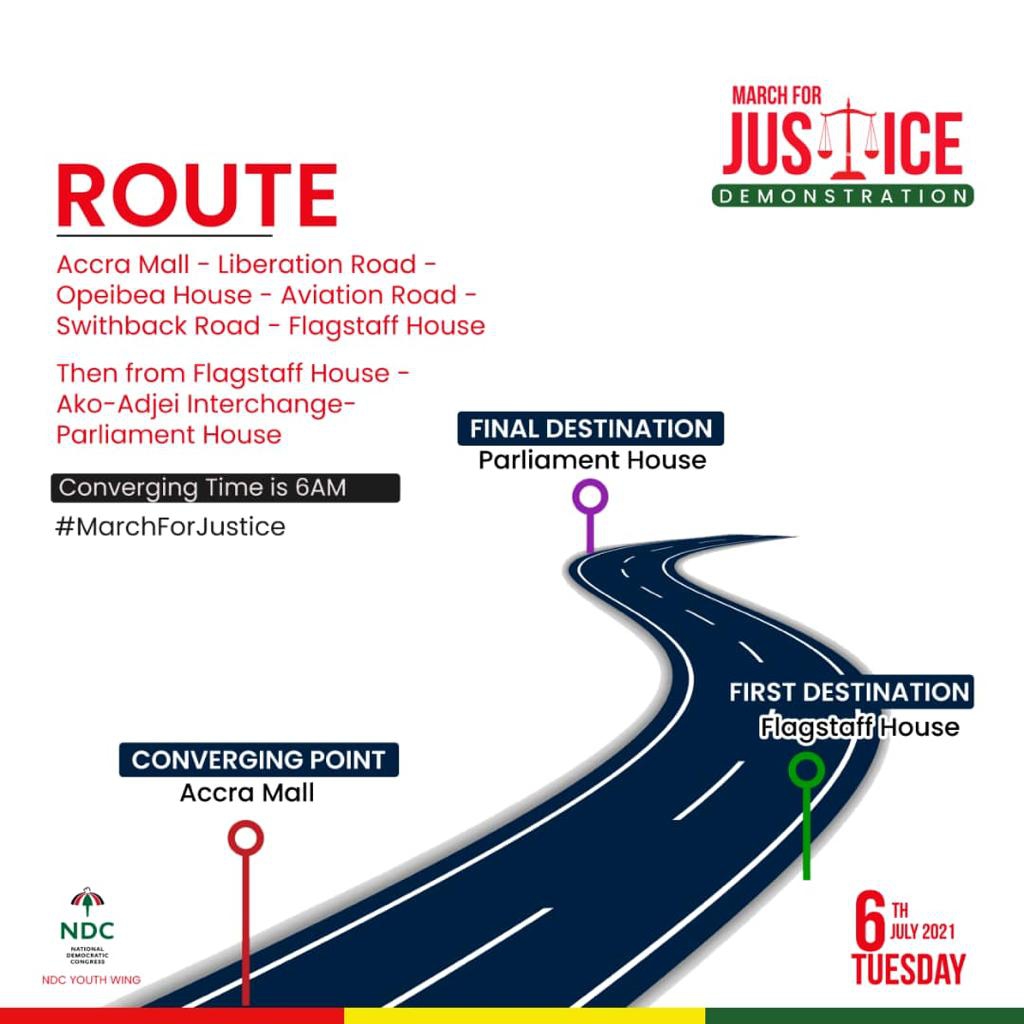 Youth wings of the opposition party, National Democratic Congress, NDC, is set to hit the streets today, Tuesday, July 6, 2021, in a demonstration dubbed ‘A March for Justice’.

Members of the group are demanding justice for all persons killed or brutalised by various security agencies in the country as the NDC’s National Youth Organiser, George Opare Addo, stated that the march is also to call on the government to fix several issues arising in the country.

“We intend to demonstrate and tell this government about our misgivings about happenings in this country. It is going to be a very peaceful march. We are marching for justice for our fallen brothers and sisters, to tell this government to fix the country, and create enough jobs for young people. We want the culture of silence to be broken and insecurity within the country tackled.”

In a statement signed by George Opare Addo, the time for convergence is 6:00 am at the Accra Mall where protesters will, from there, march through the Liberation Road to Opeibea House through Aviation road through to the Lands Commission.

They will then proceed to the Flagstaff House through the Switchback road, use the Ako Adjei interchange through to Parliament House.

The youth wing has assured the safety of demonstrators and the strict enforcement of COVID-19 guidelines.

“Leadership appreciates the goodwill and support the street protest has received so far from Ghanaians from all quarters, CSOs, other political parties, and allied partners. This demonstrates that the generality of Ghanaians is in support of marching against the social ills this government has visited on us as a people”, the statement read in parts.

The group will be at the Jubilee House to present a petition to President Nana Addo Dankwa Akufo-Addo and also petition a similar one to the Speaker of Parliament at the Parliament House.

The NDC youth wing had notified the police of the street protest.

In a letter to the Inspector General of Police, the NDC youth wing said it was writing to the police in accordance with the Public Order Act (491).

“Restrictions imposed by the Executive Instrument (EI) 395 to contain the spread of the COVID-19 pandemic have still not been lifted”, the police stated.

This did not sit well with the youth wing as they threatened to go ahead with their planned demonstration despite the Police Service’s refusal to provide protection.

The Inspector-General of Police (IGP), James Oppong-Boanuh, subsequently requested to meet the leaders of the youth wing over their planned demonstration, where a decision was taken to offer them protection.

Desist From Carrying Yourselves As If You Have Been Approved-...